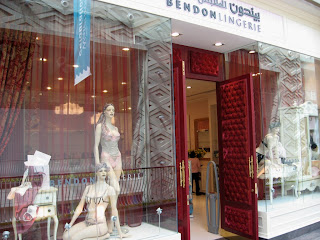 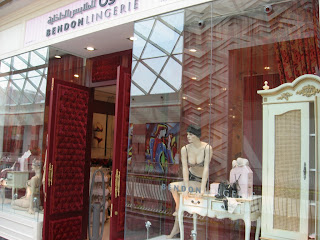 The first Bendon boutique in Dubai is located on the ground floor at the Mall of The Emirates. The newest Bendon boutique on the second level of the recently opened Festival Waterfront Centre it's decorated as a lady's boudoar.
Bendon first started making quality intimate apparel in 1947. That’s when Ray Hurley, a demobilised naval officer, joined forces with his brother Des – a pattern cutter by profession. The name Bendon was a literal description of how the product of the new company, Hurley Bendon, worked. The Hurley brothers offered lingerie that could "bend on" to the body, marking a departure from the heavy wire, steel and bone foundation garments that were prevalent.
From then on, innovation became the key to Bendon’s success, with its revolutionary introduction of stretch strap bras and stretch bodyfashions in 1963 paving the way to its first million dollar sales figures, in 1964.
In 1977 the Bendon range was introduced to Australia and in 1982 the company was publicly floated on the New Zealand stock exchange. In 1987, Bendon merged with Ceramco Corporation. Pacific Retail Group is the current owner of Bendon Ltd, having acquired it in March 2002.
Bendon now has a considerable number of lingerie brands in its portfolio, including Bendon Lingerie, Hey Sister!, Fayreform, Bendon Men and Hickory, and the licensed Elle Macpherson intimates and Macpherson Men brands.

Hi All, about the Bendon:
Warning!!!!
Last summer during a sale, I was tempted by the discounts and the large availability of sizes and bought in a hurry 8 pairs in different colors. Only when I went back home and checked all, I discovered that all are made in China. So, not really sure if Bendon is good value for money.......a bit overpriced for what it is..